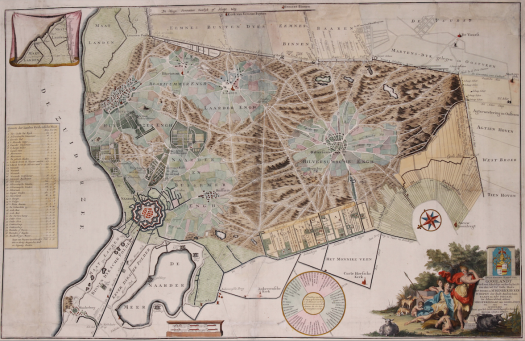 This detailed map of Het Gooi (the area around Hilversum in the southeastern corner of the province of North Holland) is dedicated to Hendrik Bicker, one of the city councillors of Amsterdam and owner of a manor house in 's Graveland. It was most likely Mr Bicker that had this map made. His coat of arms is depicted (of course), in the lower right. In 1725 Bicker had a round stone placed on the Tafelberg near Blaricum, signposting the surrounding settlements and a compass rose. This compass rose is also on the map. The data for the creation of the map is mainly derived from maps that came on the market in 1709 and in 1723, but on the smaller scale. Now on a larger scale and because of the separate inset of the 'Maatlanden' (grasslands), the map became more suitable as wall decoration, rather than for practical use. New was the mention of village of 's Graveland with the country houses and the names of the main residents. Bicker proudly had his name and title 'Fiscael' printed in the floor plan of his lot. This was a wonderful present he could give to his friends and business relations. The left of the map shows a legend that states the size of the grounds (who's showing off here?) of the so-called erfgooiers (residents who had the right of use and the right to administer the arable land in Het Gooi). The map was less accurate than the earlier maps, but due to the wider distribution by the Ottens publishing house, it became known to a broader audience. For general use, this was the only proper topographical representation of Het Gooi until 1843. Almost all maps that were hung on the wall over the centuries, have been lost. This copy survived until present day.