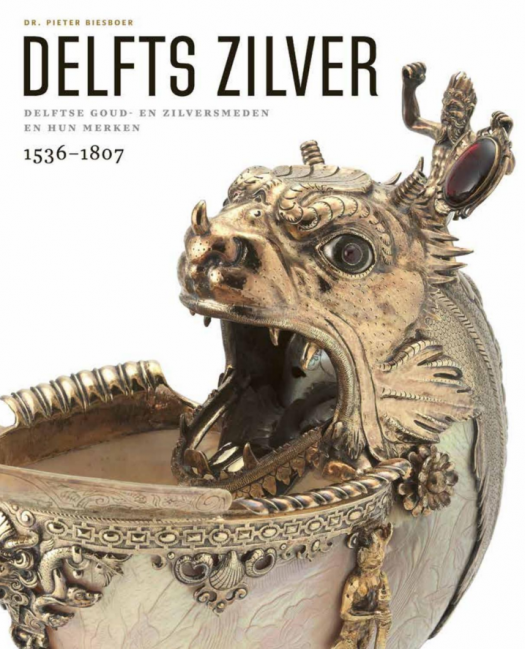 `Delfts zilver’ by Dr Pieter Biesboer, in close cooperation with Jacob J. Roosjen, was launched on 3 March 2020. The first copy was presented to Ms Janelle Moerman, Director of Museum Het Prinsenhof in Delft. The launch was hosted by Christie’s Amsterdam in their venue. The hardcover book of more than 600 pages will stun the reader because of its extensive and informative content with detailed photographs of extraordinary silver objects made in Delft by Delft masters and photos of their maker’s marks, dating from the 16th century till 1807, the year the guild system was abolished. The book offers an excellent opportunity to find out for yourselvesthat there is more to Delft than just its well-known blues and whites!

In comparison with the silver production in other cities in Holland, like Haarlem, Leiden, Rotterdam and Dordrecht, Delft silver is exceptional by the number of nautilus cups and tazzas preserved, Jasper Mes, Cornelis van der Burch and Nicolaes Adriaensz de Grebber being its most important masters. Unique are the silver figures of grape pickers and moors by Nicolaes de Grebber’s son Adriaen, not only by what they represent, but also by their sheer number. They were held in high esteem already during the eighteenth century. The guild was able to keep up the quality over an extensive period, from 1536 till 1807, when several outstanding masters were active. Already early on between 1575 and 1650, several masters delivered top quality work, which was highly valued by international buyers, such as Robert Paston. From the middle of the seventeenth century Philip Luyda and his pupil Nicolaes Keyser played an important role, the latter as the master of a large number of pupils. From 1700 onwardsCornelis van Dijck worked in the fashionable court style of The Hague and received commissions from a number of wealthy, high-ranked Hague patrons. His trading mark was a number of ceremonial drinking cups commissioned by authorities from Leiden, The Hague, Delft and Kampen, but he also made two toilet services, some wine coolers and a wine fountain, all of outstanding quality. After 1750 Dirck van de Goorberg dominated the Delft silver production. In his work he succeeded in closely following the new fashionable developments in The Hague. Two wall sconces, two sets of candelabras and candlesticks, three tea kettles, tea caddies and a tureen show his superb craftsmanship. His son Adam van de Goorberg followed in his footsteps, however due to the economic decline and his banishment from Delft for a period of seven years between 1788 and 1795, he has never become as successful as his father.

The book can be ordered via info@jacobroosjen.com