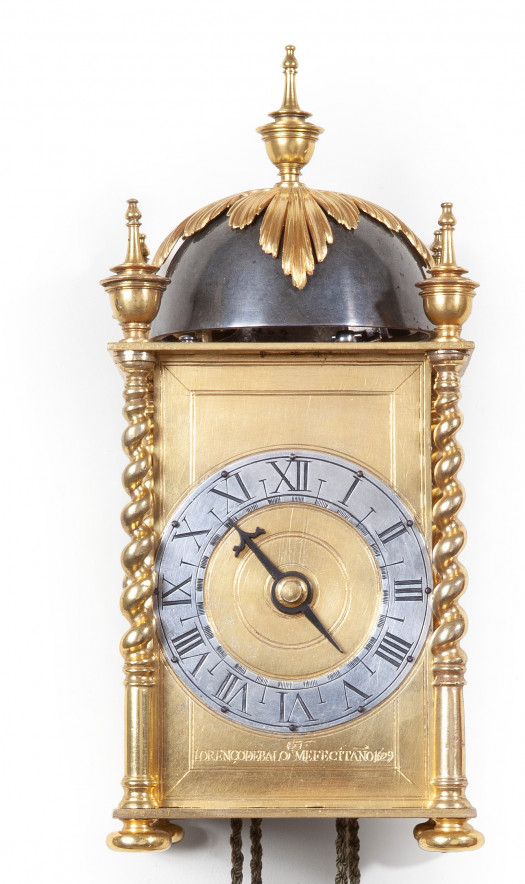 The weight-driven movement is constructed between vertical bars and has a vertical verge escapement with balance wheel, situated between two top plates. This type of escapement is one of the earliest in mechanical clocks. In addition, the movement has a striking train controlled by a count wheel, indicating the hours fully on the bell, whilst the half hours are indicated by one stroke in passing.

The austere engravings on the fire-gilt dial make the silvered chapter ring stand out. It is flanked by the attractive twist columns. The Roman chapter ring has half-hour markings, as well as quarter-hour divisions in a ring with shaded blocks. The time is indicated by a single blued-steel hand. The maker has signed and dated the dial prominently below the chapter ring: LORENÇO DE EBALO ME FECIT AÑO 1629.

The fire-gilt brass case is an eye catcher of the first order, mainly because of its characteristic shape and decorations. The barley-twist columns, with their shaped capitals and pillar-shaped bases, in combination with the bun-shaped drop finials suggest movement. The four turned finials accentuate the four corners. The case is surmounted by a bell – adorned by a top finial on an acanthus-leaf ornament. The doors to the sides, which give access to the movement, are embellished by engraved circles. The geometrical line engravings and polished areas on both doors, case and weights define its appearance. The harmonic proportions of all the parts follow the beauty ideal of the early Renaissance.