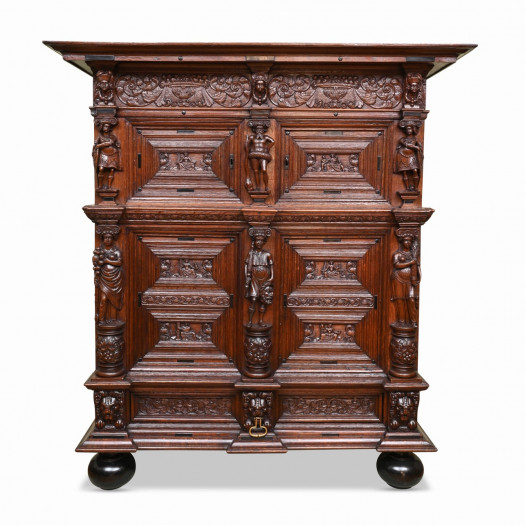 A "beeldenkast" with six statues is rarer than a cabinet with three. The more carvings on the cabinet the more expensive it is.The number of statues says nothing about the quality, this depends entirely on the talents of the creator of the sculptures and carvings.The statues on this cabinet are beautifully carved and of high quality, as well as the panels.

The canopy is carried by three tronies, a woman's face in the middle, sentries on the corners. The frieze gets two panels decorated with flowers and fruits, which is customary for a Dutch four-door cabinet.

On the door panels, decorated with ebony cubes, the six virtues are depicted.
Above Verita (wisdom) and Caritas (love), in the middle Spes (hope) and Justitia (justice)
and under Fortitudo (strength) and Prudentia (caution). The virtues are depicted sitting down, this was the usual way in those days.

The statue in the middle is Hercules, next to him two soldiers.Below is David, to his left a woman with a Horn of plenty, and on the right a battered woman with a sheaf of corn.

Hercules and David (together with Samson) are the heroes, who fought with lions and conquered them. See the lions on the underside of the hive. Hercules and David personify the virtue Force.The Horn of plenty, like the sheaf of corn, stands for prosperity. The woman holding the sheaf of wheat is harnessed, which suggests that she embodies a virtue. In combination with the Horn of plenty we can assume, that it is about the imagination of the Unity (by force).

In the plinth with the lion heads are two drawers, decorated with beautifully carved floral motifs.

So on this "beeldenkast" virtues are depicted and "Strength" in particular is highlighted as a virtue of honor and steadfastness.Hercules and David embody this virtue in combination with wisdom.When "Power" is used to promote unity, it will bring prosperity.